With the Dutch losing interest in Van Diemen’s Land after Tasman’s departure in 1642, the natives were able resume their normal lives until 1772 when the first French explorer, Marion du Fresne, following the route taken by Abel Tasman, anchored in Frederick Hendrik Bay aboard the Mascarin, along with Julien Crozet in the Marquis de Castries.

With the end of the Seven Years’ War in Europe, Marion had found himself at a loose end. Needing employment and finance he persuaded Pierre Poivre, the Civil Administrator of Mauritius, to help fund an expedition to the South Pacific, as well as volunteering to return Aotourou, a Tahitian Chief who had had been visiting Paris, back to his island home. When Aotourou died of smallpox in Madagascar, Marion continued his voyage, reprovisioning at the Cape of Good Hope and then sailing east. After the Marquis de Castries was damaged in a collision at sea with the Mascarin, the expedition headed for Van Diemen’s Land to look for timber to replace the mast on the Mascarin, and to replenish their water supplies.

This expedition is notable because it was the first to make contact with the native inhabitants. Crozet, the historian of the expedition, describes the French landing on 4 March and seeing approximately 30 natives on the shore:

Officers, soldiers and sailors landed without any opposition. The natives came forward without reluctance. They collected some wood and made a kind of stack. They then gave some lighted dry boughs to the newcomers and appeared to invite them to set the pile alight … We tried to win them over by small presents, but they scornfully everything they offered to them, even iron, looking glasses, handkerchiefs and pieces of cloth …

There appears to have been some confusion on the part of the French about the significance of lighting the pile of wood because when Marion landed and was offered a burning stick he set fire to the wood, which signalled an angry reaction and attack on the French with spears and stones. The French responded with musket fire, killing one Aborigine and wounding others. After this incident the French decided to abandon any further explorations to find timber and fresh water, and set sail for New Zealand on 10 March.

If Marion though the natives of Van Diemen’s Land were unfriendly, he was to discover that the Maoris were even more so. After an initial hospitable welcome by the natives, the French were ambushed, resulting in Marion and about 24 of his crewmen being killed, mutilated and eaten. Julien Crozet, second in command, is reported to have killed over 200 natives in revenge.

The following publication provide quite a detailed account of both the Tasman and Marion expeditions.

Extracts from Journals Relating to the Visit to New Zealand in May-July 1772 of the French Ships ‘Mascarin’ and ‘Marquis de Castries’ Under the Command of M.-J. Marion du Fresne (Wellington, NZ, 1985)

Crozet’s Voyage to Tasmania, New Zealand the Ladrone Islands, and the Philippines in the Years 1771-1772, Translator: H. Ling Roth.

In September 1791, the French Assembly decided to send an expedition in search of Jean-Francois de La Perouse, who had disappeared after leaving Botany Bay in March 1788. Bruni d’Entrecasteaux was chosen to command this expedition and was promoted to the rank of Rear Admiral when he left Brest on 28 September 1791, in command of Le Recherche and accompanied by Jean-Michel Huon de Kermadec in La Esperance. As well as searching for Perouse, they were tasked with furthering geographic and scientific knowledge in the regions Perouse had been planning to explore.

After sailing down and charting the west coast of New Holland, d’Entrecasteaux’s vessels reached the west coast of Van Diemen’s Land and then sailed south east, dropping anchor in Recherche Bay in April 1792 to look for a supply of fresh water and to rest their crews.

The French explorers carried out detailed explorations for five weeks, finding beautiful waterways and estuaries in the area, as well as identifying mistakes made by previous navigators. They established that Adventure Bay, discovered by Captain Tobias Furneaux, was part of an island and separated from the mainland by a channel (which they named d’Entrecatreaux Channel) as well as discovering Port Esperance and the Huon River.

The two ships left Van Diemen’s Land in May 1792, to continue the search for La Perouse, returning to Recherche Bay in early 1793. During this second visit the River Derwent was fully explored and mapped. d’Entrecastreaux then sailed up the east coast as far as Marion Bay before sailing away to resume the search for La Perouse. The discoveries made by d’Entrecastreaux during his time in Van Diemen’s Land led to the maps of the island’s coastline becoming much more accurate as shown by this French Chart of Van Diemen’s Land and Adventure Bay (insert) 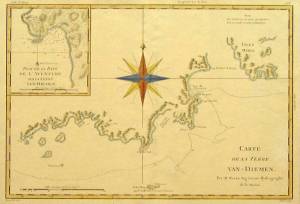 Encounters between the French and the native inhabitants seem to have been peaceful and friendly on both sides. French scientists took careful notes about the appearance, health, dwellings, diet, tools, clothing and vocabulary of the natives, and Labillardiere, one of the naturalists, records an incident where:

If our path was interrupted by heaps of dry branches, some of them walked before, and removed them to either side. We could not walk on the dry grass without slipping every moment, particularly where the ground was sloping: but these good savages, to prevent our falling, took hold of us by the arm, and thus supported us.

While an officer from La Esperance recalled, “The kindness and gentleness which seemed to be the basis of their character, gave to our meetings rather an air of reunion of friends rather than a meeting of individuals who were quite different.

Labillardiere, provides excellent descriptions of the country and the natives in his journals, Voyage in search of La Perouse Vol 1 and Vol 2

In 1800 Nicholas Baudin proposed a scientific expedition to the south of New Holland and Van Diemen’s Land, gaining support from Napoleon Bonaparte and the Institute of France. In October of that year he set sail in the gunship Le Geographe and the storeship Le Naturaliste.

In November 1801, with many of crew suffering illness, Baudin decided to make for Van Diemen’s Land. Arriving in early 1802 his expedition made an extended stay in the D’Entrecasteaux Channel. They explored the Derwent for some miles above Herdsman’s Cove, and also the Bay du Nord, properly charting Frederick Henry Bay, and the stretch of shallow water now called Pittwater. Francois Peron, one of the scientists, has recorded their meetings with the natives and given many interesting facts and incidents. Leaving the south, Baudin made an extensive examination of the east coast. He found that Tasman’s Isle was really a double peninsula to which he gave the names of Tasman’s and Forestier’s Peninsula. Lieutenant Freycinet also examined Oyster Bay, Schouten Island and Freycinet’s Peninsula.

From their first encounter they were accepted well by the natives, who were fascinated by the pale white skin of the Frenchmen and their longboat. The Frenchmen ate with the natives, traded gifts as well as entertained them. Baudin then sailed for Port Jackson, where reports were circulating that the French intended to establish a settlement on the Derwent. Governor King was sufficiently concerned to send HMS Cumberland to watch over the progress of the French expedition. When Baudin’s ships were anchored in Sea Elephant Bay on King Island, a British party went ashore raising the British flag from a tree and claimed the island for King George. Baudin appears to have been somewhat amused by these antics and continued sailing west along the southern coast of the mainland, gathering plants and specimens to add to those his scientists had already collected. Their departure did not allay the fears of Governor King who decided to send Lieutenant John Bowen to establish a small settlement at Risdon Cove on the River Derwent to pre-empt any the French claims to Van Diemen’s Land.

This site uses Akismet to reduce spam. Learn how your comment data is processed.