The Draught Instructions for Governor Phillip, 25 April 1787 set out the constitutional foundation of the Colony of New South Wales that would apply when Captain Arthur Phillip arrived at Botany Bay in 1878.

The original Instructions that were given to Phillip when he received his Commission as Governor of NSW are missing, and the Draught Instructions are the only known physical record of the original document. It is an extremely rare item held in the Public Records Office in London.

The Draught Instructions designated the territory of New South Wales as including ‘all the islands adjacent in the Pacific Ocean’ and running westward to the 135th meridian, that is, about mid-way through the continent, as illustrated by the map below (though it was not until 1798 that Van Diemen’s Land was shown to be an island, following its circumnavigation by George Bass and Matthew Flinders). 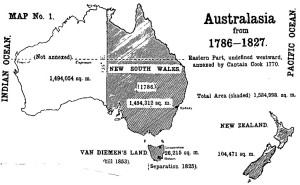 The document is significant in that it established the system of government and political culture upon which the new colony would be founded, and which would be passed on to all the other colonies as they were set up. For further information on the creation of the Australian Colonies see Year Book Australia (page 52).

It provided for the reception of English Law, including common law, equity and statute law, as well as instructions on managing convicts, making land grants and exploring the countryside. Whilst the establishment of friendly relations with Aboriginal peoples, as well as protection of their lives and livelihoods, was also set out in the Instructions, there was no mention of protecting or recognising any form of existing land rights. This assumption, that Australia was ‘terra nullius’ (land belong to no one), was to remain in place for the next 200 years.

When the first white settlement was established in Van Diemen’s Land in 1803, it was part of the Colony of New South Wales and as such subject to the provisions of the Draught Instructions.

A Law Librarian with extensive experience in general legal and court libraries. Editor of the Australian Law Librarian for 4.5 years (2008-2012) and active member of Law Libraries Tasmania. Special topics - Tasmanian legislation and case law. A passion for maintaining access to print resources.
View all posts by dashea2014 →
This entry was posted in Imperial legislation, Reception of English Law and tagged Governor Phillip. Bookmark the permalink.

This site uses Akismet to reduce spam. Learn how your comment data is processed.